This past weekend and stuff

This past weekend was quite relaxing for me. I’ve been partying a lot lately (new year’s, my best friend’s wedding etc) and I decided to stay mainly at home to relax. The main reason is that I’ve been spending a lot on weekends lately and I thought saving my liver and some money would do me good. 🙂 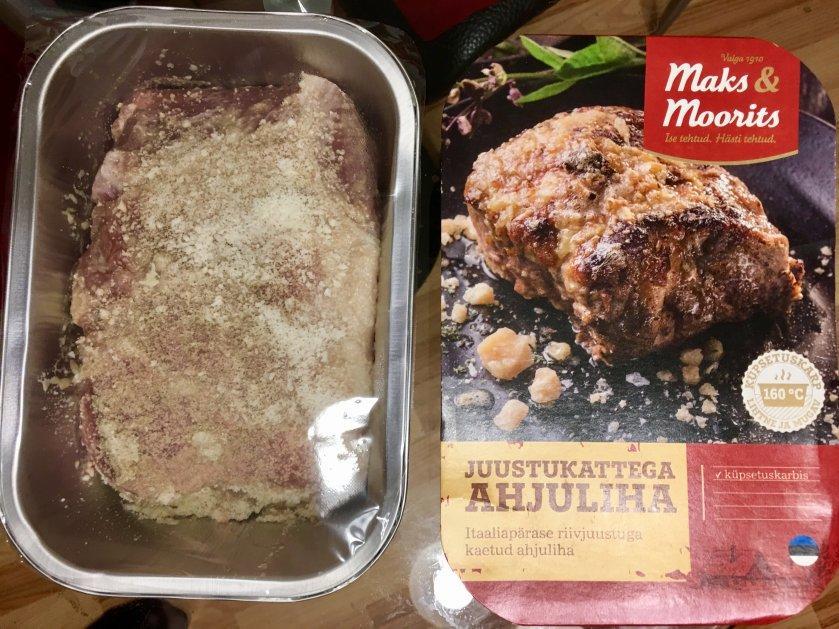 The meat itself just before putting it into the oven.

Lately, I’ve also been gaming a lot with my PC. About 2 years ago I bought and put together a new gaming machine (not my first one though, as I have build computers before from scratch). There was a period when I didn’t game at all for a long time (at least half an year or even more). Then, suddenly I got back into it again.

The same thing kind of goes with watching TV shows. I used to watch a lot, and I meant A LOT of TV shows and suddenly I just stopped watching. I might pick it up again soon though, as there’s a lot of good shows that I want to continue watching, such as Game of Thrones, The Flash, Arrow, The Blacklist, The Big Bang Theory, Supernatural, The Walking Dead, Marvel’s Agents of S.H.I.E.L.D. etc and some shows I would like to re-watch.

As for gaming and PC, I put my computer together from the following parts:

The rig still runs most games at maximum graphical settings. It does start to struggle with some newer graphically demanding games at very high or ultra settings (or whatever the games maximum settings might be called). Overall, I’m quite satisfied with my machine.

By the way, if anyone wants to play something together, you can check out my Steam profile and add me: mhenri2200.

So, this weekend, I played XCOM: Enemy Unknown. I managed to complete the game on Friday, as I had been playing it episodically for the past 6 months (meaning this was the period I didn’t really play games and I might have played like 1-2 hours a month, if at all). I only started playing it more during the past month or so. The plan was that once I finish playing Enemy Unknown, I’ll play XCOM: Enemy Within, which is essentially a DLC (Downloadable Content).

Unfortunately, at first, I had problems starting Enemy Unknown. When I tried to start the game, it didn’t run and no error messages appeared. Then I verified the integrity of the whole game (XCOM: Enemy Uknown) and apparently there were some crucial game files missing, which caused the issue where I could not start the DLC Enemy Within. Essentially, the verification process just compares the game files you have installed on your computer with those of the latest version on the Steam servers. If it’s different in any way, it replaces or adds any files. Steam just verified all of the game files and downloaded/replaced some extra which fixed the issue for me.

I also like to play games from the couch. In that case, I activate the Steam Big Picture feature and use my Xbox One controller connected to my PC to play. As a screen, I use my Phillips 47" TV connected to the PC via HDMI cable. 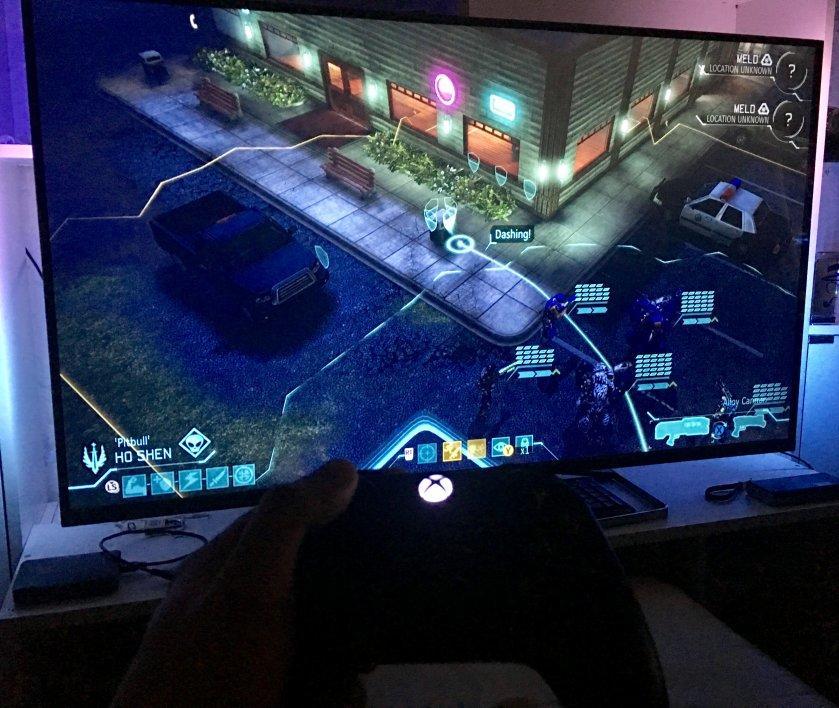 Here’s a picture of me playing the game.

Upon entering the game, I noticed that the first mission and cut-scene was really similar to that of the original one, Enemy Unknown. First, I thought either I’m having a dejavu or something’s up. After a quick Google search, I found out that the DLC Enemy Within does not have a separate story-line, rather it’s the same story-line as the original, but with some extra content, such as new missions, new heroes, gear (weapons/armor etc), genetic mutations and augmentations to soldiers etc. If I had known this, I would have started playing Enemy Within straight away skipping Enemy Unknown, but oh well.. I don’t complain. I got to experience the original one and now I’m on my so-called second playthrough with XCOM: Enemy Within.

I also managed to complete the game Deus Ex: Mankind Divided a short while ago. I played it during the Christmas and New Year’s period. The game was gifted to me by Kaspar as a birthday present (again, thank you so much!). I really enjoyed playing it. If you go to my Steam profile, you can see that it says “70 hrs on record” for that game, while my friend(s) managed to complete the game in about ~25 hours. Since I heard that the game's storyline is short before even starting to play it, I tried not to rush and took really slowly and explored every possible corner of the game – hacked most of the doors/terminals that could be hacked, explored almost all of the apartments and looted all items etc. All in all, I’m now on my second playthrough using the New Game+ feature, which pretty much starts a new game, but all of your augmentations, money and items remain from the previous playthrough, which is quite nice. 🙂

Oh boy.. seems like this is one really long post. 😀 If you have made it this far, kudos to you!

Anyway, I also have a little side project going on at the moment, which involves mixing music together (DJing, if you will). By the way, as a side note, I did mix music about 5-7 years ago, but lost interest for some reason. A few months ago, I bought an Apple MacBook Air 13″ early 2015.. and I have to say – I’m lovin’ it™. It’s really light and performs really well for the tasks I bought it for – photo editing, music production/mixing and some (light) video editing.. dat battery life doe. I also take it with me when I travel, as it’s ultra-portable and easy to carry (very light) – I can watch movies on it, even play some games (from Steam etc) and I also use it as my go-to coding machine.

On 7th of January 2017, I attended my best friend’s (Gerth and Maarja) wedding and I was responsible for the music part. I was given a task to mix some relaxing Deep House music together for when people would dine. The mix had to be something that plays on the background (not too loud), but wouldn’t bother people so they can still socialize with each other. I put together a playlist of some chill Deep House tracks and mixed it together with a program called Djay (the Mac version) from Algoriddim. You can find my mix on my SoundCloud page: M&G's wedding deep house mix.

I really enjoyed making that mix, so I thought why not do another mix. For the second mix, I chose Future House as the genre. I already have a track list put together and all the tracks locally available and ready. I just need to mix the whole thing together. I’m also going to use Algoriddim’s Djay this time, as it’s simple and easy-to-use, yet quite a powerful DJ mixing software. I also like Traktor and other music mixing software with more advanced features and more control, however what I really like about Djay is the Spotify integration. You can load songs straight from Spotify. The downside is that you cannot record the mix into a file with Spotify songs (due to copyright etc), only mix it in the app live. Recording feature only works with music tracks that are stored locally on your computer. 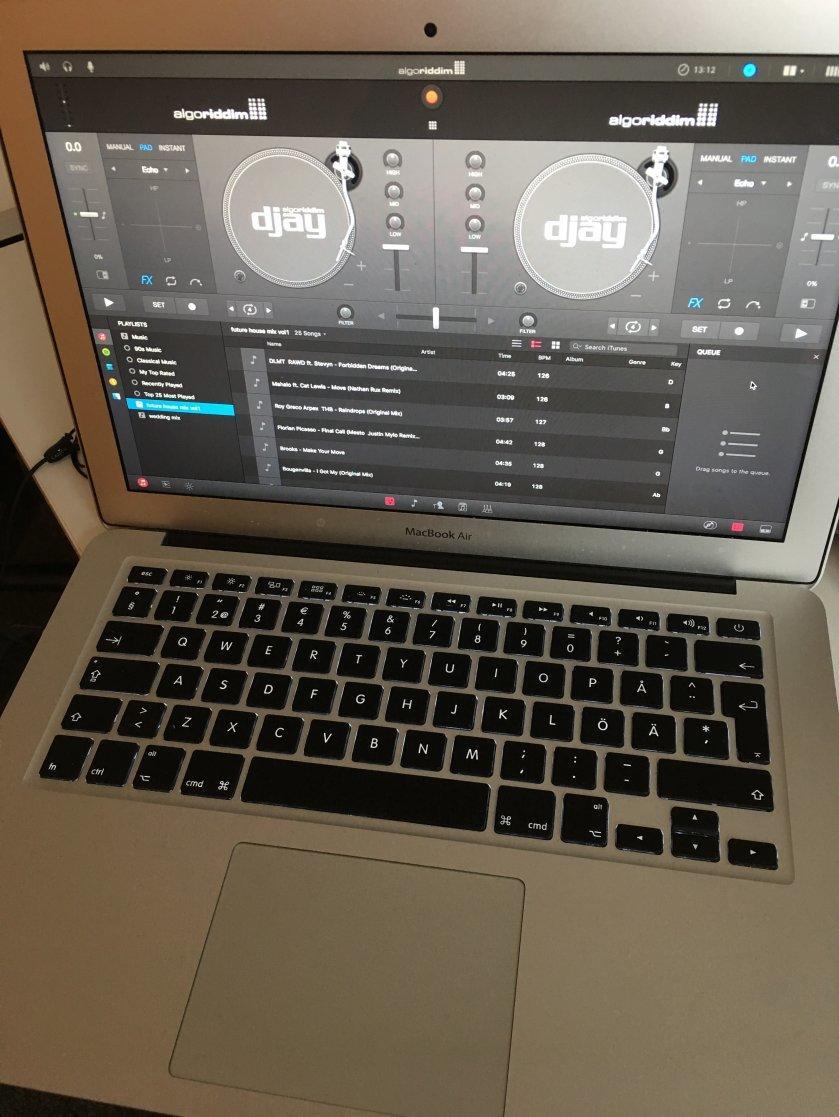 Here’s a picture of my MacBook Air and the app Djay.

Once I finish mixing the whole thing, I’ll upload it again to SoundCloud, so stay tuned. 🙂

What else did I do during the weekend? Well, I also rooted and flashed a custom ROM to my Android phone - LG G3. I don’t really use it and it’s just my backup phone (got it from my company I work for). My main personal phone is an iPhone 6s Plus, as I really like iOS, but I thought why not play with my G3 a bit. The ROM I flashed is Fulmics ROM. It’s based on stock LG kernel and lots of apps and UI is implemented from the newer LG G5 (including the camera app), but offers lots of customizations.

I already had a different ROM installed (stock LG Android 6.0 for LG G3), as previously I was rocking Lollipop (Android version 5). Since LG wasn’t providing an update to Marshmallow (version 6) for my LG G3 (model L855 international), I thought I should take thing to my own hands and update it myself using a custom stock ROM. I had rooted the phone previously, but un-rooted it after that as I didn’t need root (..rooting also has it’s cons in addition to pros – some security features are disabled etc) and the custom recovery partition wasn’t working properly, so I thought I’d fix it also. I reinstalled the TWRP custom recovery properly and in the process I also rooted my phone, again, but with KingRoot. The LG One-click root didn’t work for me, so I had to use KingRoot instead. After that, I flashed Fulmics. It’s quite nice, I like it.

Alright, this is it for today and probably for this week or some time. Thank’s for reading and as always: stay awesome!