As promised in my last blogpost, I’m writing about my vacation in Alanya, Turkey – so here it goes. Disclaimer: brace yourselves, as this post is going to be quite on the long side.

Me and my good friends (Maarja, Gerth and Kaspar) decided to go to Turkey this year as our vacation destination. For the past 3 years or so, all of us (mostly at least) have vacationed together during the summer and hopefully our tradition continues indefinitely. Our trip started on the 31st of May, 2018 at 21:05 EET from Tallinn Aiport – it was a Thursday. Thankfully I had a free day from work. It was a nice sunny day. Not too hot and not too cold. To be honest, the whole May was quite warm and sunny, to everyone’s surprise, because we usually have had snow in April and May, and if not snow then constant rain 24h. It’s been a very dry season so far. Not so good because much of the grass has dryed out here due to the lack of water and rain. I don’t say this often, but I wish there would be more rain soon. Funny that when there’s no rain and a lot of sun, you want rain and if there’s constant rain, you want the sun. Would be nice to have both – best of both worlds - but I guess it’s too much asked. 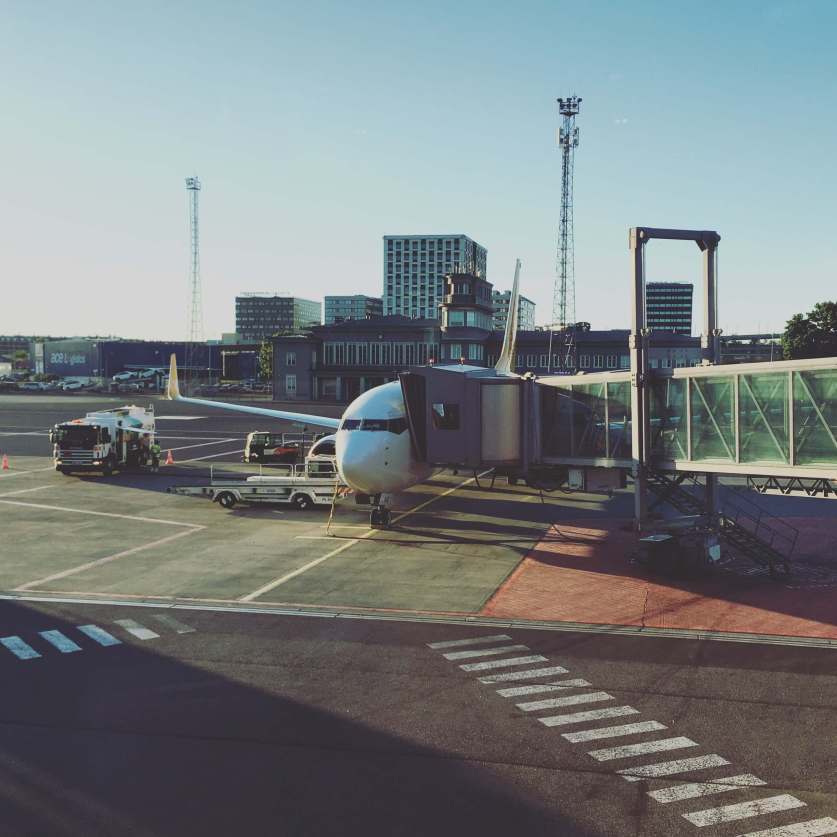 Here’s a picture I snapped moments before we boarded our plane. Lookin’ good, woop woop!

The plane trip itself took about 4 hours. Distance travelled: about 3000km. Me and Kaspar were sitting together in one row (there were 6 seats per row, so not the biggest nor the smallest plane) and Maarja and Gerth were a few rows ahead of us in the middle of the plane next to the emergency exit. They had extra legroom, so that’s nice.

On our arrival to Antalya International Airport, we took a quick bathroom break and headed outside. As we walked outside of the airport, we immeditaly felt the very warm air around us, even though it was like 1AM there. I even remember the smell of the air outside – it’s quite different from ours, for obvious reasons. Additionally, Antalya (and also Alanya) and Tallinn are in the same timezone so there was no need to adjust our clocks.

There we were waiting for information about which bus we should hop onto so we can get to our hotel in Alanya. The trip itself was about 2 hours. We stopped halfway near some gas station or shop/market-thingy. As most of us were really hungry, we decided to get ourself some good ol’ kebab – man was it delicious. They even put fries inside the wrap. After that we stopped by some hotels and finally we had arrived to our hotel – Muz Beach Hotel. „Muz“ in Turkish means „Banana“. Even the logo of the hotel has bananas on it. Distance travelled: about 120km from the airport.

First we had some hassle with our rooms, but finally settled in with ease. It was about 4AM in the morning. Me and Kaspar were in one room and Maarja and Gerth were in another. 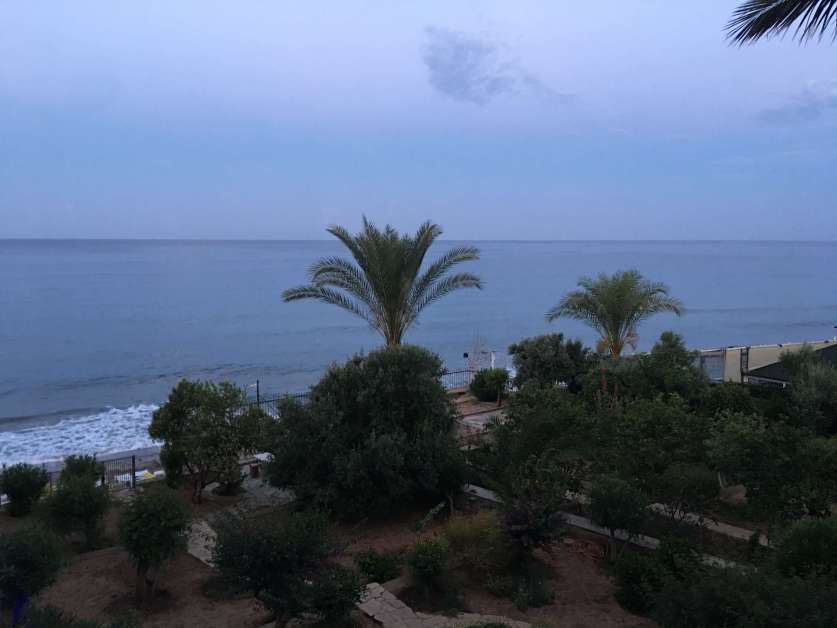 This was the view from the hotel room in the early morning when we arrived to our rooms. 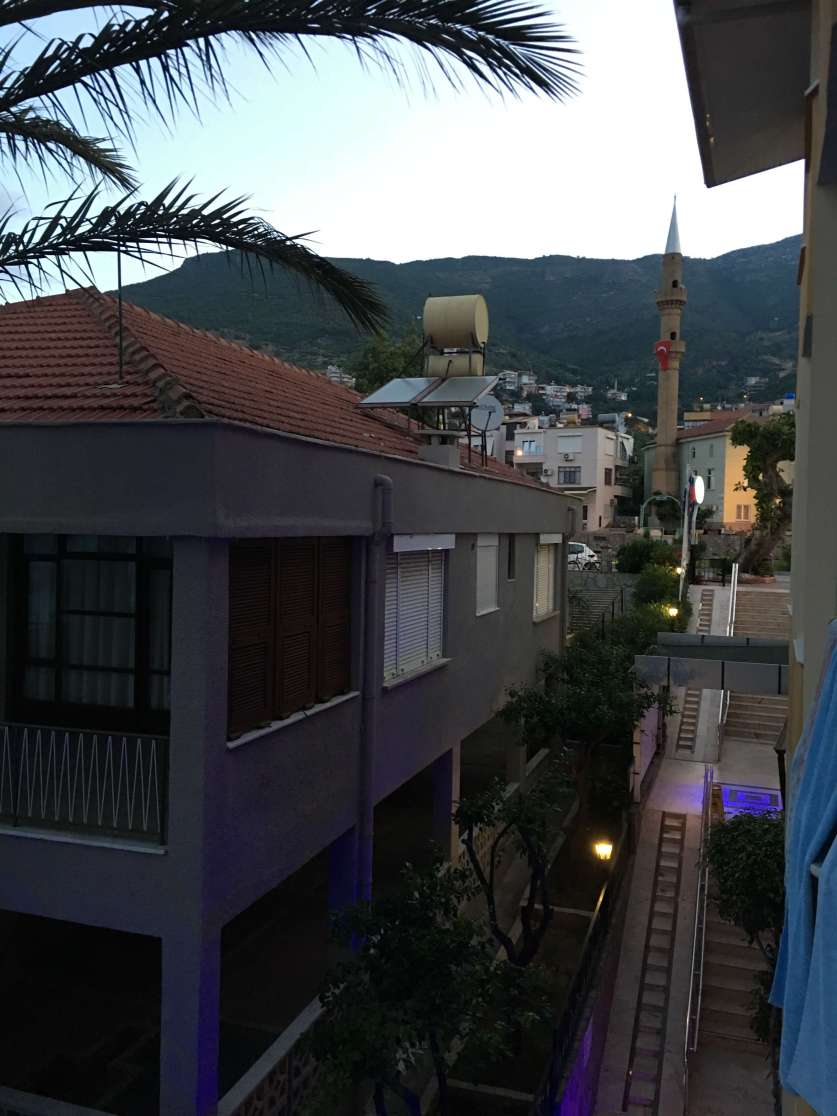 When looking right, you could see beautiful mountains and a Mosque tower with the Turkish flag on it.

Turkey is quite a religious country with it’s main religion as Islam, because Islam has the larget community of followers in the country. Such towers as shown above are everywhere around there and each one is equipped with loudspeakers so that it may be used to invite Muslims to prayer. Muslims in Turkey perform the Salaah (prayer ritual) five times a day. You can hear the calling each time coming from those very same loudspeakers. From really early in the morning around 3:43AM until late in the evening. The first one is to awaken the faithful for payer and I guess the last one is to end it for the day. Each time, a true-believer Muslim has to find the nearest Mosque and pray inside or if not possible, then find a clean and calm place to do the needful while making sure they are facing Mecca – they even have apps for such things nowadays. All in all, it’s quite fascinating in my opinion.

We went to sleep really late due to late arrival, so naturally we were a little tired the next morning, or shall I say day. Most of the times, we did not make it to breakfast as it was too early for us. I mean, if I’m on vacation, I don’t want to wake up early – sleeping until noon is the way to go! Thus, our first meal of the day was mostly lunch (or brunch for us, like usually on Sundays). We also ate dinner quite frequently, unless we were eating outside in some restaurant. The hotel food itself was quite good I have to say. Selection was decent – proper meat, different selection of salads and everything green, soups, sweets etc. Coffee was bad though, unless you like cacao-tasting coffee. Usually we had a little walk and enjoyed proper coffee at Robert’s Coffee with delicious hot chicken wings and fries. I mean, we’re Estonians after all – folks who are quite demanding when it comes to coffee quality. 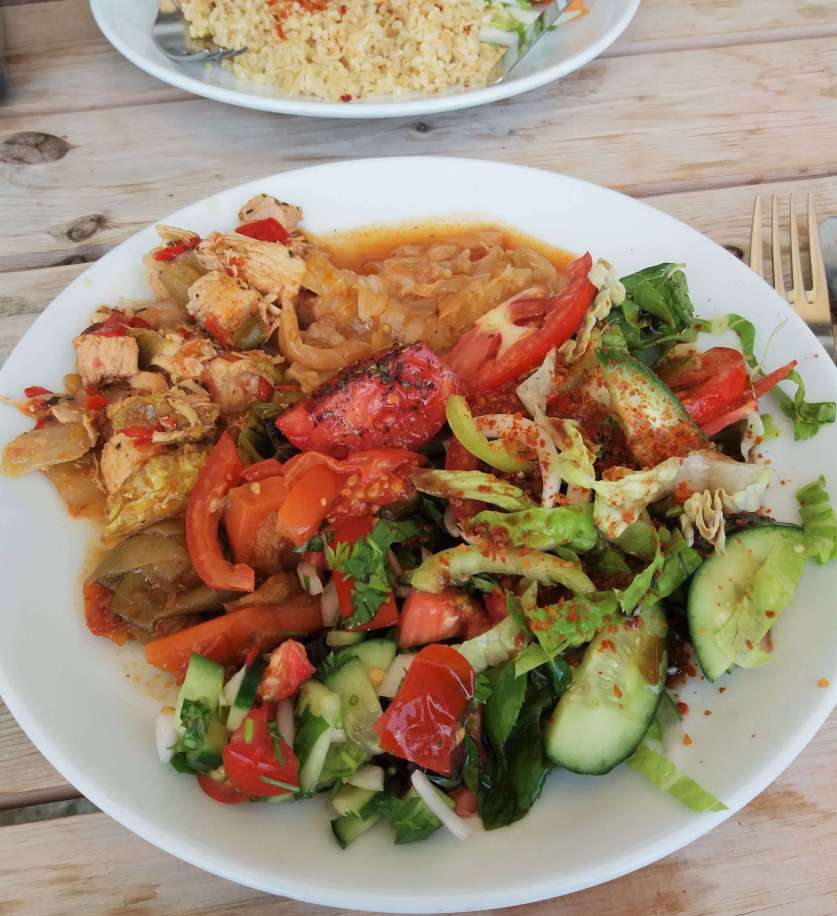 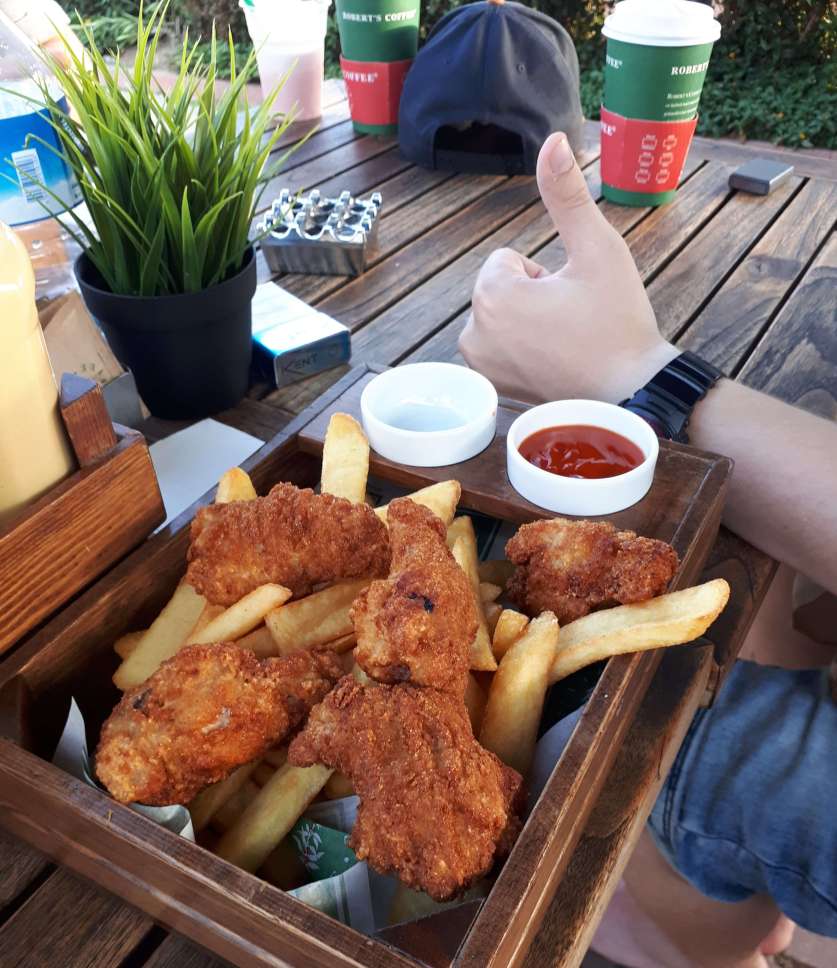 As we had all-inclusive, we drank lots of beer and cocktails. The beer in our hotel was quite good. If you’re a beer drinker, I recommend to try the Turkish beer EFES, which was also available in our hotel as much as you wanted. However, the vodka was watered down, but to be honest I can totally understand why. There were a lot of people who ordered a glass full of vodka and a small softdrink to the side. They drank that vodka like there’s no tomorrow. Can you imagine if that vodka would also be strong aswell? Chaos – lots of people really drunk really fast and puking etc. Maybe people started drinking already from the morning. The all-inclusive bar was open from 10AM to 11PM. On many days we took full advantage of it and had lots of drinks on our table. We mostly enjoyed beer or vodka cocktails. 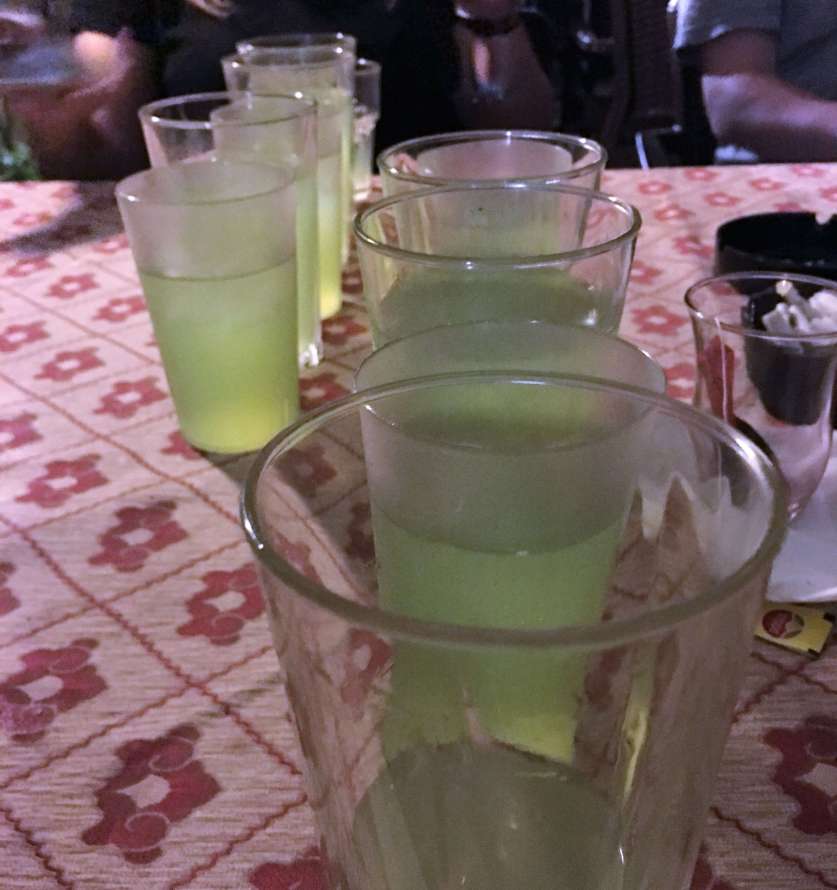 Tower of Power material - aka while we were in Bulgaria last year, we collected all of the plastic cups as a joke to see how much we had drank at the end of the trip. I can tell you that it was a lot!

Speaking of all-inclusive, many hotels in Turkey don’t actually sell non-inclusive rooms, as the price difference is so little. We had one local guy join us to our evening celebrations at the hotel restaurant outside. We were playing a card game, as usual. The game is called Star Realms by White Wizard Games – awesome deckbuilding game! Anyway, the local guy told that he paid around 100 Turkish lira for 1 night which is about 18€. We were in Turkey while there was Ramadan. This means that Muslims cannot eat or drink from sunrise to sundown, but after that it was allowed. Sex and such things were totally forbidden during Ramadan, for Muslims of course. The guy who was with us took a break from it all, as he explained and was just chilling and drinking beer with us. A really cool guy who also happend to be nerdy like us. I mean, 4 people playing space themed deckbuilding card games almost every night should explain a lot. I’m pretty sure some people thought we are just a bunch of nerds who got out from our basement and even then we couldn’t help ourselves, LOL.

On the following days we did some exploring to get to know Alanya a little better, so we would have an easier way of navigating around. Internet in Turkey is quite expensive (approx. 2.5€ per 1MB), thus we had to rely on our navigation skills and Wi-Fi here and there. 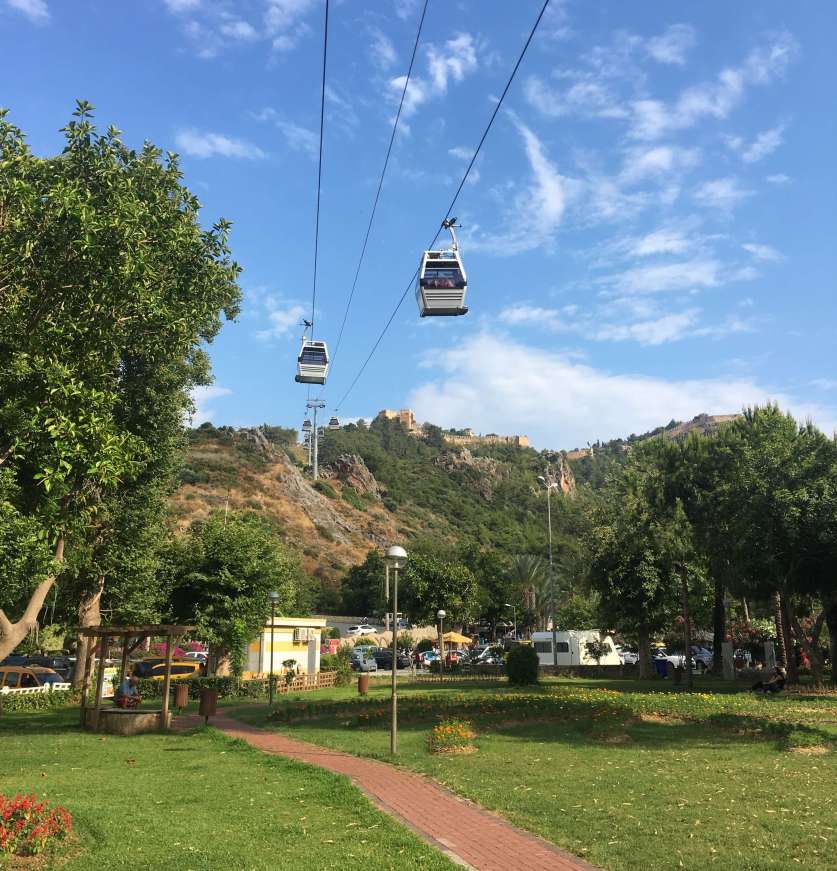 Here’s a lovely picture of the funicular which took people to the mountain from where you could walk up to Alanya Castle.

After that we ended up in Damlatas Caves. The ticket was really cheap and it was a wonderful experience. Though, the humidity was insane inside that cave. The cave which has a unique apperance with the stalacties and stalagmites has a temprature of 22.3 Celcius, humidity of 98% and weather pressure of 760mm.

A little bit of history about the cave: Damlatas Cave was found as a coincidence during the opening of a stock quarry for the constructions of a harbour in 1948. The cave is at the west side of historical peninsula. The stalactites and stalagmites are supposed to be formed between 10 000 and 15 000 before Christ. The cave took the name Damlataş because of the water drops which continue to drop to the cave from the stalactites. In addition to its charming beauty, Damlataş Cave contributes to the promotion of the town and it is also famous with its weather which is good for asthma patients. So, if you have astma, go to that cave and it’ll be your heaven! The cave has heartily acid-carbonic in its weather and the weather is the same both in summer and winter. 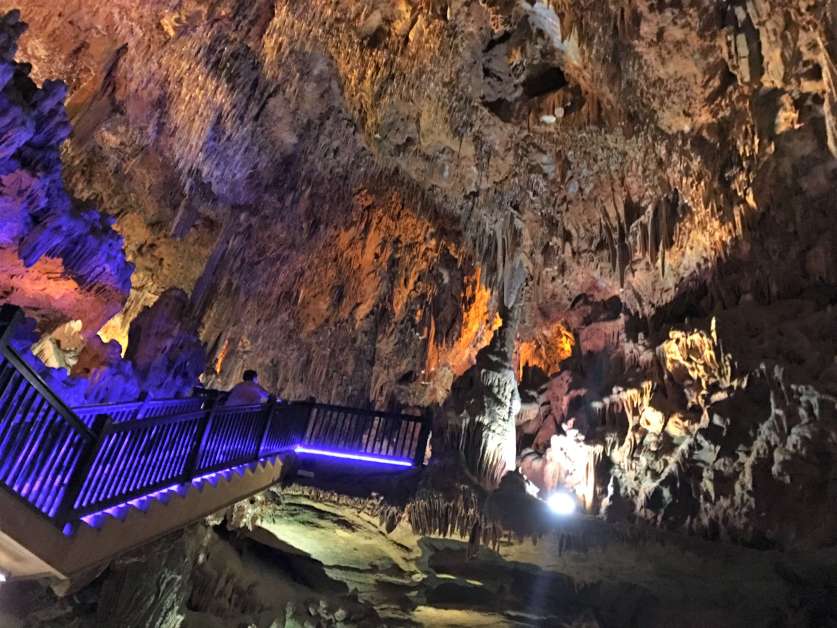 Here’s a picture from inside the cave.

Later on the same day at night, we went to a nightclub called Millionaire. Some of my friends could not bare the loud music while me and others danced a lot. As I understood, the music is so loud due to some competition between the clubs – the louder you are, the better so you are heard. 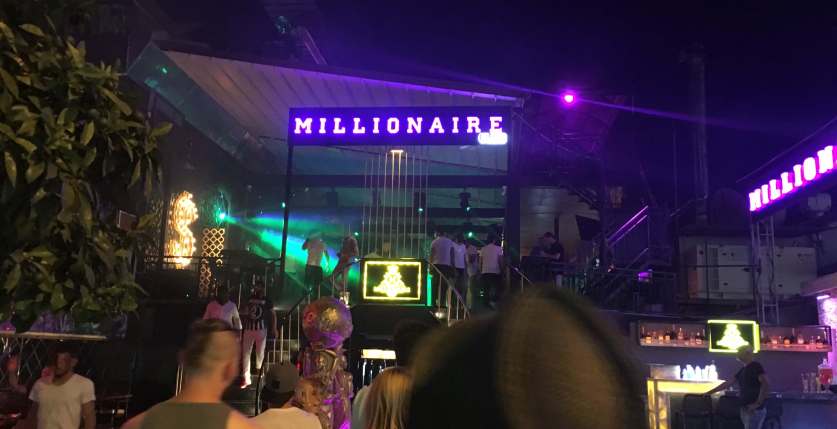 A quick picture I snapped while approaching the club.

Naturally, the next day we were quite tired, but no hangover though. Thanks to the warm climate, hangovers here are next to nothing, or minimal. However, since we felt tired, we didn’t do much other than, you guessed it, play card games. Thankfully we could afford days like that where you do nothing while being a vegetable, as we had 2 weeks to spend. The next day we took our business to the pool. We played pool ball, enjoyed beer and cocktails and of course, the warm sun. 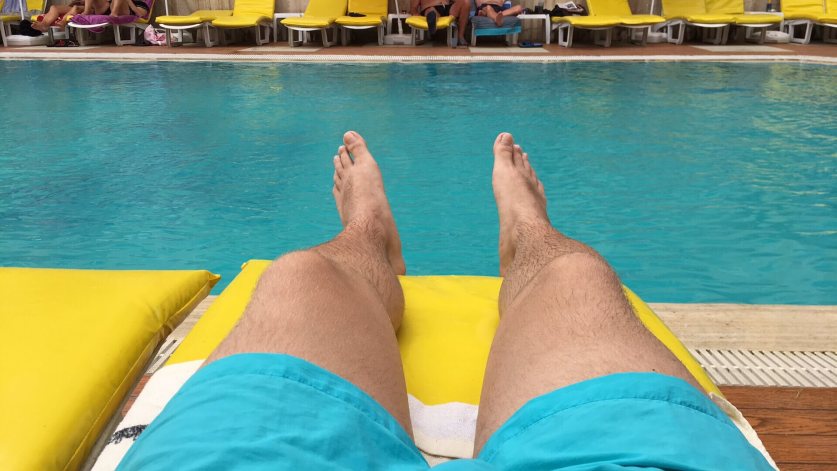 Alright, this is the end of part 1. I'll write part 2 when I have more time. Until then, keep it cool and thank's for reading my blog!